I’d like to thank Wes and his crew at Black Ops Defense for their help with my Schmeisser AR15 clone build. This rifle turned out fantastic. You guys are the best!

Wes and team did truly fantastic work converting a factory MR556 to a tan CAG gun. The tano and engraving are amazing, honestly it has become a true collector’s piece! Thank you!

This has taken me quite some time to get posted. I must say I am I’m super excited to have gotten this back from Wes and his crew who did a masterful job on my MP5. I’ll definitely be recommending your service, Thank You!

Worth the wait! Wes and all the talented guys at black ops did a fantastic job on my MP5 build. Far exceeded expectations. Well done, thanks guys!

These guys did a fantastic job creating my HK G36 clone. Unlike other companies that do these conversions, these guys will actually talk to you on the phone and go over what you want step by step. Not only were they fast, they did a great job. You will not be disappointed going with Black Ops Defense, Thanks Guys. Semper Fi !

Got my MP5 today, gun was fully built by Black Ops Defense off of a parts kit they supplied. Wes and his team do amazing work, the finish and welding on the gun are immaculate …10/10 would recommend and I will definitely be having some more projects built by them!

You guys did a fantastic job!

Just wanted to drop you a quick email with a pic of the finished product after my scope was added, on my Model LV. Again, thanks a lot, rifle is great! You guys did a fantastic job!! The Hensoldt Z24 scopes do fit well! 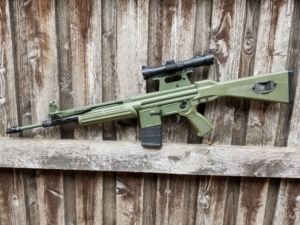 Your work was amazing! The instructor at my long rage shooting class loved the rifle

Hey Guys! Your work was amazing! The instructor at my long rage shooting class loved the rifle and was able to ding the 600 yard target on the first shot. He was highly impressed.

Ive copy pasted what I wrote in the PTR-91 fan group on facebook below:

Rifle was done by Black Ops Defense. Following parts were added by them:

Optic is a Vortex PST FFP 6×24 EBR 2C M-rad on a Addmount one piece lower.

Stock is a MagPul PRS2. Adding a rear monopod as its freaking painful to hold and bags are not stable enough for me.

Ammo was 175 grain Atomic 308 Match. 0 FTF, 0 FTE, 1 dented round when ejecting. Unable to get a FPS due to the instructors chronograph breaking in two due to a muzzle-brake…lol

Due to lack of bipod, shot from bags. I have shaky hands (dunno why) and my shooting position in the dirt was partly in a hole, so couldn’t hit anything longer then 500 yards. That said, one of the instructors jumped on it and was able to ring the furthest target at 600 on his first shot. I am waiting on the sling mount to come in, Harris bipod will be used. Mount is currently stuck in German customs…..don’t ask. I might just get the AFAR kit from Atlas bipod company.

Ammo is fully re-loadable but has flute marks, not sure if this is because base rifle was a PTR-91FR or because of the work done. Can anyone else that has the same rifle confirm about the ammo being reloadable?

All in all, great day at the range and great class as usual. Thanks Black Ops Defense 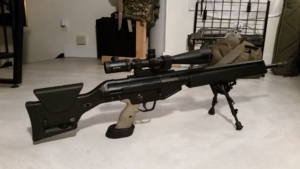 Black Ops Defense did a great, professional MP5 for me with all HK parts.

Black Ops Defense did a great, professional MP5 for me with all HK parts. Good communication as to the progress and even a video of the testing. They’re the best in the business and I’ve told everyone interested in my gun where to go! Just wanted to say thanks and now I know where to send my next project for completion!
Sincerely,
Keep the powder dry 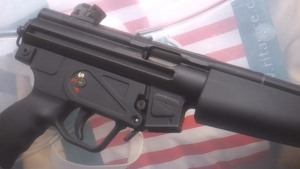 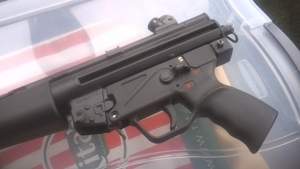 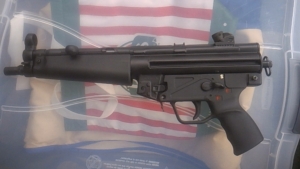 Full weld on G36C conversion came out great. I wanted to send you this cool photo to put on your website. Thank you again for the great product! 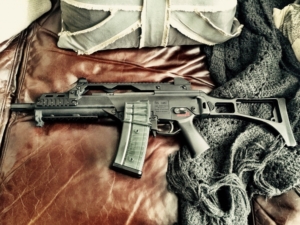 I just wanted to take this opportunity to thank Wes and his team for a job well done on my G36 conversion . The job they did is second to none and the communication between Wes and I was great! When I had a question it was answered. When it comes to customer service, they’re the best. I was very impressed by the prompt reply and timely answers to my emails and phone calls. I would be interested in doing another project with Wes and his staff. They are true professionals at the job they do. Thank you Wes and your staff for the very professional, job well done, on my G36 conversion. Looking forward to doing another project with you folks. 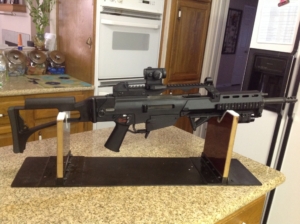 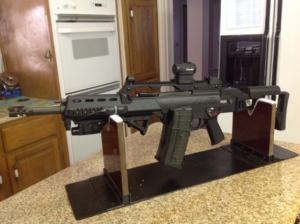 Of all my suppressed weapons this is my favorite!

Last year you did a UMP conversion for me. Just thought I would send you some pics of my finished rifle.
SBR with AAC Tyrant 45. It has been serving it’s purpose very well which is night vision hog hunting. I have it zeroed at 50 yards and it will shoot a coke can size group. There have been no failures to feed. With 400 rounds fired. The 230 grain projectiles do serious damage on the Texas Hogs. Of all my suppressed weapons this is my favorite! It’s very very quiet and packs a punch. Something different in an AR world.
It always turns heads with my night visioning buddies and the quality of the conversion has been complemented many times.
Both of these pictures are from this week. Thanks for the great rifle!!
Looking forward to doing another project in the future. 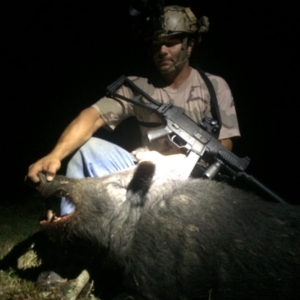 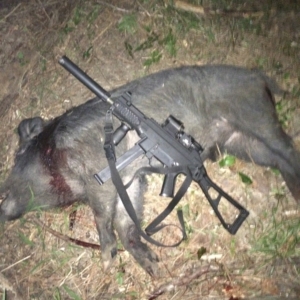 Submit Your Own Testimonial

We hope you've had a great experience with Black Ops Defense! Let us know how we did by submitting your own Testimonial.

This website uses cookies to improve your experience while you navigate through the website. Out of these, the cookies that are categorized as necessary are stored on your browser as they are essential for the working of basic functionalities of the website. We also use third-party cookies that help us analyze and understand how you use this website. These cookies will be stored in your browser only with your consent. You also have the option to opt-out of these cookies. But opting out of some of these cookies may affect your browsing experience.
Necessary Always Enabled
Necessary cookies are absolutely essential for the website to function properly. This category only includes cookies that ensures basic functionalities and security features of the website. These cookies do not store any personal information.
Non-necessary
Any cookies that may not be particularly necessary for the website to function and is used specifically to collect user personal data via analytics, ads, other embedded contents are termed as non-necessary cookies. It is mandatory to procure user consent prior to running these cookies on your website.
SAVE & ACCEPT